It seems that there is a possible formula that decides the likelihood that a show will soon be canceled. It has something to do with the correlation between the viewers of a SHOW between the ages of 18-49 as compared to the the viewers of their NETWORK, who fall into the same age range.

The main reason this article caught my eye, was because I needed to deliver a big "I.TOLD.YOU.SO" to my boyfriend who is cursed with a very desolate condition called, "Horribly Bad Taste." Over the summer, we took a trip to Vegas, and got to be part of a test audience for the new CBS show Gary Unmarried. (WHICH, by the way, they did not take my title suggestion and name the show "My Ex-Life." Perhaps this is the true source of my hostility...)

When you enter the screening room, everybody is handed a sort of remote control with a dial on it. The dial ranges in numbers from 1-100, and they tell you to rate your amusement/enjoyment throughout the entire show. My dial never really raised much above '70', (the jokes were, if possible worse than the actors), while Mike's dial stayed at a steady '95' the entire episode. Afterward, we had to type up a list full of our criticisms and suggestions. My list was full of extensive character analyses and joke criticisms, while Mike's form looked more like: "I LOVE JAY MOHR! THIS SHOW IS SO FUNNY! I CAN'T WAIT FOR THE PREMIERE!"

This is why I have a website about television and Mike is not allowed to help me with it. If Mike had a website, next week he'd put up a review on how awesome the new Knight Rider TV show is. Luckily, according to THIS website, both shows will be canceled by next week! So long, Gary! 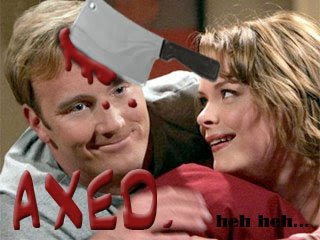 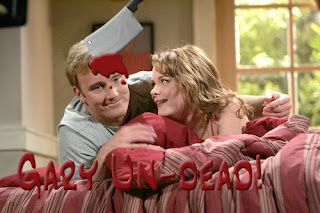 Okay, I'm done, but seriously, check it out and see which of your favorite shitty shows will be canceled soon!

TVbytheNumbers.com
Posted by EvilCleopatra at 2:53 PM

i'm here to flatter you apparently.
p.s. ur blog is amusing

i love how you still refer to mike's 'condition'

WELL, i only watch E! reality shows so that i can anticipate what will be covered on "The Soup" later in the week. That's a truth.