Hmm, so I suspected this might happen; this whole “me not updating” thAng. Oops.

A lot of things have been going on, and I just can’t do them all justice at once!

Sunday night was quite an evening (for those with premium cable networks! ha. ha.) I figured out a way to make it all work, world. Apparently Showtime feels bad for pitting their best shows against HBO’s best shows and vice versa, because if you work it just right, you can watch Californication (On Demand), True Blood, Entourage, and then the repeat of Dexter on Showtime. Quite a 3 hour block of television.

In another week of True Blood, Bill the Vampire takes Sookie to a FangTasia, the local ‘Vamp Bar’ in Louisiana. Since Anna Paquin severely overacts her role as Sookie, the surprise breakout of this episode is definitely Ryan Kwanten, who plays Sookie’s man-whore brother, Jason. In the first few episodes, I was just blown away by how this dude’s only purpose has been to fuck women. LOTS OF WOMEN. HANK MOODY STYLE. It’s honestly been ridiculous so far, until this last episode, where, in a moment of panic, Jason has no choice but to swallow a whole vial of ‘V’ (the street name for Vamp Blood). Much to his DISMAY, his dick grows to the size of an eggplant, and even constant masturbation does nothing more than give him disgusting blisters on his thumb. FUCKED UP. Looking forward to more of this next week!

Entourage wasn’t too special this week, but it’s cute how Vinnie is growing up! Eric is working hard to book a deal for his writers, while still minding Vincent’s best interests. Finally, Vince learns how to be a man, and takes the 2nd lead in the movie. SO GRACIOUS!

Dexter was by far the best of the night. I don’t even think I should say much about Dexter, except that Deb is still annoying, and Dexter’s relationship with Rita is better than it’s ever been. As usual, Dexter does something that sort of puts him in danger of being found out, but all of that is put on the backburner when the bomb’s dropped in the last scene of the show. I’ll only leave you with this: 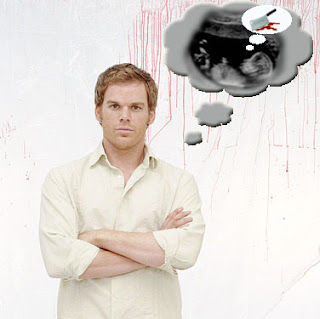 Posted by EvilCleopatra at 4:11 PM