(Disclaimer: I am not being paid by either Netflix or Roku to write this article.  I wish to God I was being paid by Netflix and Roku, but unfortunately I am bored and doing this of my own accord, for free.  I just love Netflix this much!  Do you hear me, Netflix?? Yaaaay!)

Last Christmas was the first year I ever co-habitated with a boyfriend.  My mom – most likely spurred by her annoyance with my sister and I constantly signing into her Netflix account online – needed a present she could gift to both of us, and after a little research, discovered there was such a thing as a Roku box.  A simple, tiny little black box that comes with its own HDMI cable to hook up to your HDtv.  With a few swift swipes on the keyboard and a couple of clicks of the mouse your Roku box instantly connects to your wifi signal, and you have access to all the Netflix movies, Hulu channels, and HBOgo shows your little mind can process!  This was probably the best Christmas gift I’ve received in years – unfortunately, instead of being proud, this fact just serves to depress my mom, because she thinks she’ll never be able to top it.

Because our subscriptions to HBO and Showtime seem to be a constant source of disappointment around our place, the boyfran and I have begun a habit of watching a new Netflix movie nearly every single night of the week.  This isn’t even an exaggeration – even after we watch our weekly doses of Shameless, It’s Always Sunny in Philadelphia, Teen Mom 2, Jersey Shore, or Hardcore Pawn, we can’t seem to end our night until we’ve expanded our minds with whatever random B-slasher movie Netflix has added that week.
It’s become sort of a game between us – keeping tabs on how many winners each of us can choose.  He wins this game so much that I have to work twice as hard to find a movie that can impress the both of us.  If I let him pick a winner too many nights in a row, he starts to get all cocky and likes to make it clear that he has better taste in movies than me.   It’s too much for me to handle and one of these nights, I’m going to bash him over the head with the Roku box, and then neither of us will win.  (It’s ok – my behavior is justified, because this just mirrors his behavior when we play each other at Punchout! on the Wii.)
Some nights we just want to pick something mindless that will make us laugh, other nights we get excited to see that classic movie we haven’t seen since we were seven years old, but most nights we just get sick of peeling through the endless movies, arguing over what to watch, say “fuck it!” and just click play on the next movie with more than two recommendation stars.  THESE ARE ALWAYS THE NIGHTS WE BOTH WIN!
In the past month alone, we have found a pretty decent collection of “winners,” and I can’t keep them to myself any longer.  If you haven’t seen them yet, spend the gosh durn $7.99 that Netflix charges per month - yet everybody continues to cry about – and start looking up these movies!
6. Bad Boy Bubby 1993, UR
Pick: His
Netflix Description: “Sequestered from civilization since birth, 35-year-old Bubby (Nicholas Hope) is deemed "a bad boy" by his abusive Mum (Claire Benito), who's kept him indoors by telling him he'll die outside. But when Bubby finally leaves the house, he's forced to confront his fears -- and learn some truths about humankind. Australian auteur Rolf De Heer directs this darkly comic cult hit, which won praise at the Cannes Film Festival.” 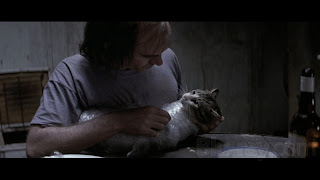 Okay, bear with me on this one.  The first 40 minutes or so of this movie are pretty dark and fucked. up.  Boyfran kept begging me to let him turn this one on, and it sounded soooo depressing.  I finally gave in one night, and for the first part of this movie, I kept shooting him dagger eyes and reminding him that this was HIS pick.  But suddenly, after some even darker turns, the movie became downright entertaining!  If you are intrigued enough to make it past the first part, this movie changes up gears and eventually turns into this epic story of a man making his way through a pretty substantial life even though he is severely emotionally stunted.  I’d also be lying if I didn’t let out a few random laughs at some of the f-ed up shit going down at the beginning, ie this cat above…
5.  Parents 1989, Rated R
Pick: Mine
Netflix Description: “In this horror-comedy set in the stuffy 1950s, Michael has everything his 10-year-old heart could desire, including a great dinner every night. Soon he questions where all the leftovers come from and discovers his parents are cannibals!” 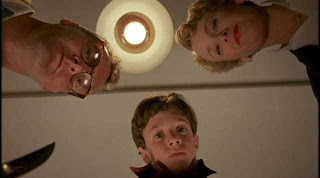 Alright, maybe not completely my pick.  This is one of those descriptions we read at the exact same time and both exclaimed “YES!” before the other could argue. So I'll just go ahead and call it "my pick" so I can have a LITTLE edge, here.  It should be noted that Randy Quaid was on the cover, so that sort of did us both in.  “Horror – Comedy” doesn’t quite do this one justice, as it is more of a black comedy, but it was stylistic and kept you on the edge of your seat.  The kid who slowly begins to suspect his parents are serving him human for dinner is adorably strange and I never knew whether to laugh or be freaked out by Randy Quaid.  Overall, Parents was an awesome 80’s movies that I can’t believe I had never heard of before.
4.  Videodrome 1983, Rated R
Pick: Mine
Netflix Description: “Sleazy TV executive Max Renn (James Woods) is looking for cheap, exciting programming for his fly-by-night channel when he fortuitously stumbles across a fuzzy satellite feed showing torture, punishment ... and possibly murder. A conspiracy is afoot as two competing groups fight for the 20th century's soul, using the airwaves as their battlefield. Renn searches for the truth, all the while obsessed by an on-air chanteuse (Deborah Harry).” 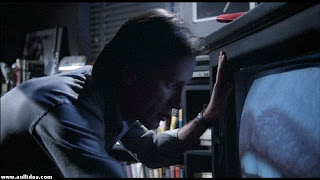 Ironically, for all the David Cronenberg movies I had to watch in college classes, this was one all my professors skipped!  Maybe it was too obvious a selection for a group of television/media majors to view, and the threats of television taking over the minds of entire populations of people was too apparent a choice.  Regardless, considering this movie was made in 1983, television has since been converted to High Definition and 3D and with the interactive strides of iPads and iPhones, Cronenberg’s observations of television eventually taking over our minds hits a little close to home.  Though boyfran was totally into the movie, he had trouble dealing with all the weird biological deformations that Cronenberg is often so fond of.  Also, Debbie Harry plays a sadomasochistic sex freak!
3.  The Vicious Kind 2009, Rated R
Pick: His
Netflix Description: “There's nothing like first love to bring family tensions to a boil in this dark comedy, nominated for two Independent Spirit Awards. Adam Scott stars as Caleb Sinclaire, whose emotions go haywire when his brother (Alex Frost) brings home new girlfriend Emma (Brittany Snow). As the dysfunctional family is propelled into chaos, Caleb and Emma confront their mutual distrust and attempt to resist a growing sexual attraction.” 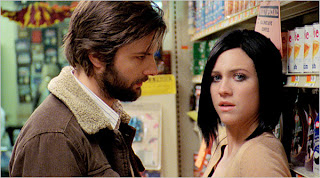 So if you’re keeping track, the guy is more or less winning the game so far.  This was his pick because he is attracted to anything that involves Adam Scott acting like an asshole.  Scott did not disappoint. His character didn’t have many redeeming qualities but I was actually charmed by his mental breakdown throughout the movie.  I was also excited to see J.K. Simmons play the somewhat misunderstood dad in this, and this is probably the first movie I really liked Brittany Snow in!
2. The Wild and Wonderful Whites of West Virginia 2009, NR
Pick: Both of Ours (“Fuck it!  Just put SOMETHING on!”)
Netflix Description: “Hailing from Boone County, W. Va., mountain dancer Jesco White may be the most famous member of the White clan -- thanks to the 1991 documentary The Dancing Outlaw -- but he's hardly the most colorful. This film focuses on the rest of the brood. Director Julien Nitzberg spent a year with five generations of the West Virginia family -- and spoke to various members of their community (including the sheriff) -- to provide this colorful portrait.” 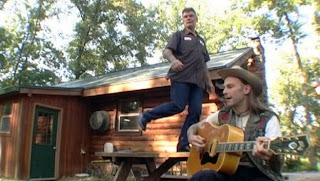 So, we didn’t agree on ANY movies the night we picked this one, and it got to the point where we just needed to get something on before we both fell asleep.  We seemed to remember somebody mentioning this before (thanks, Corinne!) so we hit play.  I’m a sucker for ANY voyeuristic-type documentary and this is the king of them all!  This crazy family is apparently famous down south, and almost every single one is addicted to drugs.  But they don’t give a shit!  They have fun and make no apologies. Though I did end up caring and genuinely enjoying some of the characters and their storylines, it’s sick fun to watch how crazy they are, if only to sit on your high horse and feel superior for being so much better than southerners.  Which leads me to my final suggestion…
1.Tucker & Dale Vs. Evil 2010, Rated R
Pick: His
Netflix Description: “Expecting to enjoy a relaxing vacation at their rundown mountain cabin, backwoods boys Tucker and Dale see their peaceful trip turn into a nightmare when college kids camping nearby accuse the duo of being psychotic killers.” 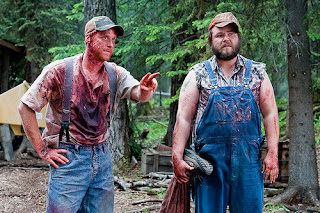 OKAY! HE WON.  He picks so many more winners than me, and his taste in movies is way better and I don’t want to talk about it anymore…  ANYWAY.  Last night, he kept begging me to give this one a chance.  I am soooo sick of seeing the same shitty horror movie played out over and over again where the college kids go on the road trip down south, they accidentally cross paths with the deformed hillbillies and finally the rest of the movie is spent trying to escape the grasp of the crazy murderers.  Which is why I didn’t want to watch this movie!  Which is why I SHOULD HAVE watched this movie sooner!  This movie, turns the genre on its head and takes the point of view of the hillbillies (from West Virginia, of course) and explains why a lot of those movies are probably just one big misunderstanding!  Hillbillies are people too, and maybe douchebag college kids should just leave them alone, because they deserve peaceful vacations once and a while.  You’ve probably seen the two main actors in a bunch of other movies, but I could only think of Alan Tudyk as Steve the Pirate from “Dodgeball” and Tyler Labine always plays the funny, fat dude in cancelled TV shows.  Either way, it was a fun, enjoyable flick with parts that made me laugh out loud, if only because I’ve seen too many backwoods slasher movies.
One last note:  If you don't have Netflix and aren't able to watch any of the aforementioned movies, HBO is about halfway through Sex and the City 2 right now. I swear to God.
Posted by EvilCleopatra at 8:06 PM